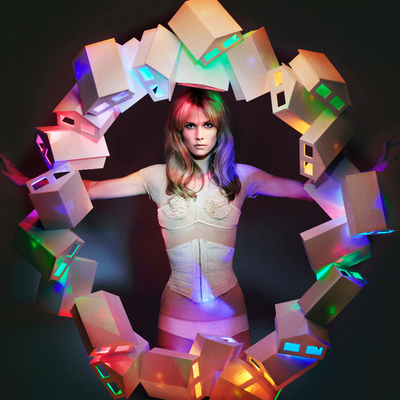 Does pop music really need another tiny, sexy, kooky fashion plate? If that fashion plate is 25-year-old stunner Oh Land, then the answer is a big, resounding “Yes.” Born in the outskirts of Copenhagen to an opera singer mother and a composer father, Oh Land is the latest Scandanavian import making a splash on the alternative pop scene.
I discovered her several months ago when she opened the show at the Fox Theater in Oakland for OMD. After her set she was milling around in the crowd and my pal Nic and I got to rub elbows with the Nordic goddess! Then I got a second surprise last month at the Scissor Sisters show at the Warfield in San Francisco when she again opened the show. Miss Land is really getting herself out there! She also just won LOGO’s “Artist on the Brink” Award at the 2011 New Now Next Awards.
Her self titled debut album is sublime. Yes, every track!