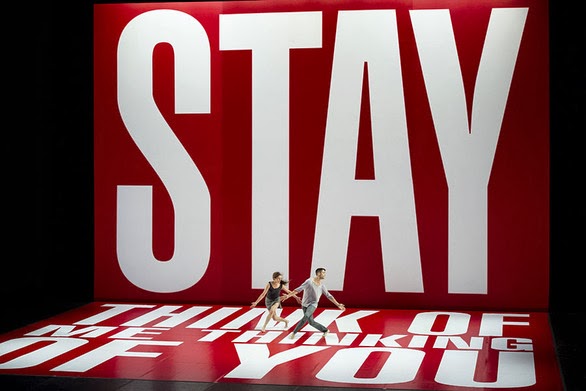 Two of Los Angeles’ better-known fine artists, Barbara Kruger and Sterling Ruby (he of Raf Simons fashion fame), are tiptoeing into the world of dance, designing the sets for the opening of LA Dance Project’s residency at the Ace Hotel Theatre, a lavish Spanish Gothic space dating from 1927.


The show is separated in to two acts. The first with Kruger’s larger-than-life and typographic stylings with the words “Think of Me Thinking of You” emblazoned across the stage and backdrop. For act 2 (in typically dark fashion) Ruby contributed a color-field backdrop of rectangles painted in splotchy colors, reminiscent of a tattered Stars and Stripes—not unlike his couture tie-dyes for Dior.