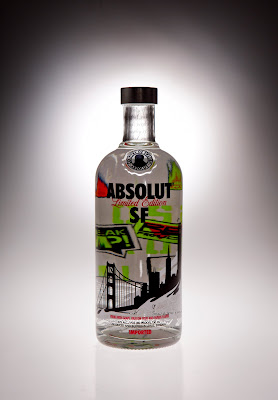 The long-awaited (well, for some) reveal for the San Francisco version of Absolut vodka has ceremoniously arrived. As noted by Camper English in the weekend’s paper, Absolut SF will be introduced Wednesday as a blend of three flavors: grape, dragon fruit, and papaya.
But before you get all confused and skeptical about those seemingly-random flavors, they actually make some sense — the grape represents Wine Country and the dragon fruit and papaya represent the Asian and Latin communities, respectively. There are also local artists involved in the bottle art and other Absolut SF-related things, like the Facebook campaign and launch party.
Launching Wednesday, it’s the fifth annual city-inspired flavor from Absolut, following in the footsteps of New Orleans, Los Angeles, Boston, Brooklyn.