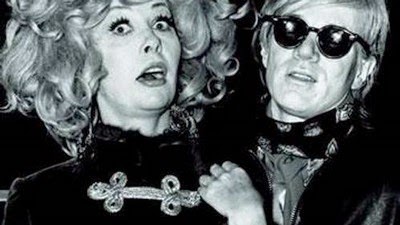 Andy Warhol’s Superstars, the eclectic group of stylish eccentrics championed by the artist, are just as influential today as they were in their 1960’s heyday. Along with socialites and muses like Baby Jane Holzer and Edie Sedgwick, many of them artists in their own right, the motley crew included Ultra Violet, who, earlier this week, went to the great Silver Factory in the sky.


Born Isabelle Collin Dufresne in France in 1935, Ultra Violet met Warhol in 1963 through her lover and collaborator Salvador Dalí. He immediately offered her a role in one of his films and the lilac-loving artist, actress, and author was transformed into Ultra Violet, the superstar with purple hair, makeup, and clothing. Throughout her career she appeared in 17 films (not including documentaries), among them Midnight Cowboy, where she and other Factory denizens recreated a party of Warholian proportions.


In her 1988 memoir, “Famous for 15 Minutes: My Years With Andy Warhol,” Dufresne spoke out against the excess of the scene that made her famous. But she remained a prolific artist until her last days. This spring, New York’s Dillon Gallery recreated the artist’s Chelsea studio on the occasion of the 50th anniversary of the Factory, featuring her photographs and sculptural works. It closed just three weeks before her death.