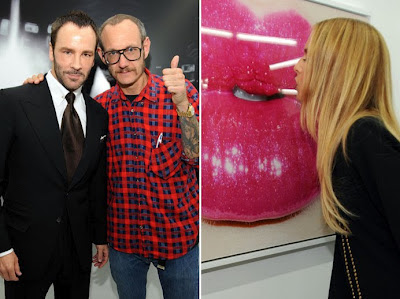 The artwork took second billing to Hollywood hoopla this week at “Terrywood,” Terry Richardson’s first Los Angeles showing, at Aaron Bondaroff and Al Moran’s OHWOW Gallery. And to be sure nobody missed it, a Terrywood sign was erected on the gallery’s rooftop and searchlights crisscrossed the night sky. The show attracted enough of a scene that a line snaked down La Cienega.
The show was ALL Hollywood and atracted the likes of Tom Ford, James Franco and Rachel Zoe. Despite its equally renowned grime, Richardson has sought the shine of Tinseltown, a place where he grew up. A photo of a giant stack of In ‘N’ Out burgers, a row of Oscar statuettes wearing Richardson’s signature specs and the neon girls of a strip-club sign deconstructed and removed of context. The only thing missing was an appearance by the Hilton sisters. Oh, wait a minute, nevermind…