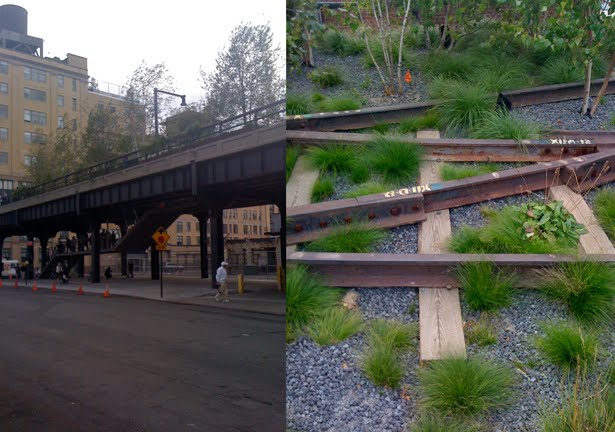 Wallpaper Magazine has named the High Line Park in New York City one of the Life-enhancers of 2009 in their annual design awards. I was in New York in September to blow off some steam and see the Book of Love 25 year reunion show at the High Line auditorium. Suffice to say, I spent the bulk of my visit in the Meat Packing District. It’s an area of Manhattan that for years was a run down and sketchy area riddled with prostitutes and drug dealers. Most cab drivers would even refuse to take you there. Today, it’s one of the most chic and trendy neighborhoods in the city with the likes of Alexander McQueen, Stella McCartney, Jeffrey and the fabulous French Brasserie Pastis. The High Line Park frames the west side of the neighborhood along the Hudson River. The park is built on an elevated freight train line that was abandoned 29 years ago. The now urban park utilizes a lot of the existing tracks and railroad fixtures as movable seating and landscape implements. The project involved a ten year advocacy and was fully realized by designer James Corner with Diller Scofidio + Renfro. The mile and a half stroll is a must see.