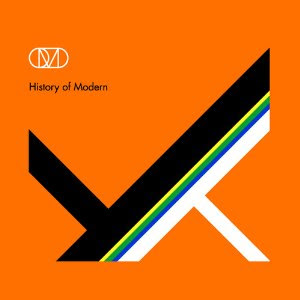 Orchestral Maneuvers in the Dark (or OMD as they are more commonly know recently released “History of Modern” their first album in over a decade and the first that brings the two founding members back together. The other part of the collaboration is their design director Peter Saville. Peter designed some of the most iconic and memorable album covers from the new wave 80’s and beyond. Bands like Joy Division, New Order and OMD used Peter exclusively. It’s great to see they maintained their commitment to the visuals sensibility now as well.
I was lucky enough to see Peter speak ay the AIGA-SF Design Lecture Series some years back. The stories he told of how he came up with the concepts and ideas of each project were fascinating and at time down right hilarious! And being British, told with just the right amount of quick wit and dry sarcasm. I loved it!
Several years later I happened to be in London at the same time the British Museum of Design was having a retrospective of Peter’s work. I nearly died! It was a very complete exhibit showcasing a variety of work from the Factory Record days (with the original paste up boards marked up with non-repro blue and all!) all the way through to his short stint as a partner at Pentagram and his collaborations with Nick Knight and Issey Miyake.
The deluxe package of “History of Modern” features a bonus disc with all of the album artwork out takes which is fantastic. Oh, and the music is pretty darn great too!

One response to ““History of Modern””