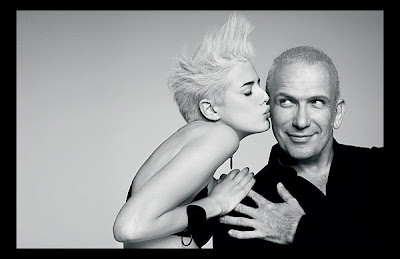 Guess what, Dallas??
You’re being thrust into the fashion limelight. After a record-breaking run in Montreal, Jean Paul Gaultier’s blockbuster exhibit is traveling to the Dallas Museum of Art, opening November 13. Not only is it the museum’s first foray into contemporary fashion, but it also marks a new addition to the show: the motorcycle costume Gaultier designed for Pedro Almodóvar’s 1993 film Kika.
Avec headlights, this piece will join Gaultier’s other 140 couture and ready-to-wear ensembles from 1976 to the present, including the cone bra from Madonna’s 1990 Blond Ambition Tour, as well as excerpts from films, concerts, music videos, and dance performances. Previously unpublished images by the likes of Andy Warhol, Cindy Sherman, David LaChapelle, Richard Avedon, Mario Testino, Steven Meisel, and Steven Klein will also be on display.
As if that isn’t enough, those animatronic mannequins of Gaultier that became the lovable mascots of the Montreal show, well, they’re baaaaack! Dressed as sailors and sirens, punks and saints, they’ll sing, chant, and make random comments throughout the exhibition space. So, you might want to stay on alert for that as you stroll through the museum.
Next stop, The DeYoung Museum in San Francisco. Expect a photo of me and Jean Paul posted here when the show get’s to town!