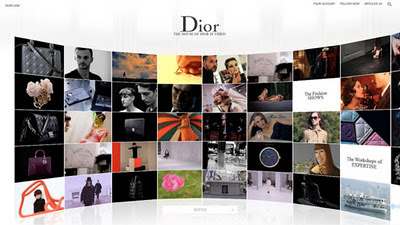 In a dramatic case of out with the old, Dior is about to reveal a new look—not that New Look—just in time for fall. But instead of tossing out another famous name, the luxury house is ditching its old website for a new one that brings together beauty and fashion for a one-stop Dior experience. The interim trailer is so suspenseful and action-packed it deserves its own theatrical release.
The new megasite, which will launch tomorrow, was created with the curved design of the brand’s 30 avenue Montaigne headquarters in mind, featuring portals that lead to the different facets of the Christian Dior universe, from Kris Van Assche’s sleek menswear to Victoire de Castellane’s baroque jewels.
Modern touches include 100+ videos showcasing the brand’s savoir faire and plans for an upcoming digital magazine. No word yet what it will look like, but I’m probably not alone in hoping it’ll feature fashion’s most eagerly anticipated reveal: the identity of John Galliano’s successor.