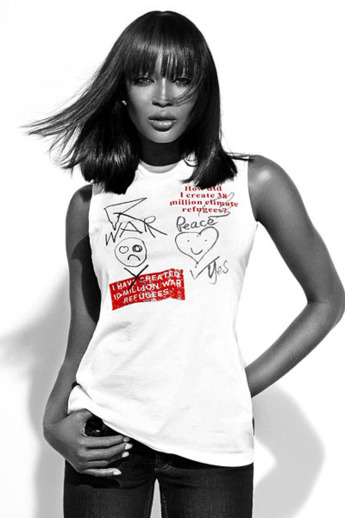 “What we’re talking about regarding climate-change refugees is total chaos, where natural disasters are more intense and more often,” says Vivienne Westwood. “The world is giving us this warning of more horror to come.”


Scary stuff, but Dame Viv is hardly immobilized by fear. She’s been active and vocal on the topic for as long as I can remember, slightly louder now with this T-shirt reading “How did I create 38 million climate refugees?” and using a low carbon supply chain for a 90% smaller footprint than the average cotton tee. It’s been photographed on supermodels (Naomi Campbell) and super people (Romola Garai, Roisin Murphy) since it was shown on her runway during London Fashion Week. Sales of the shirt benefit the Environmental Justice Foundation (EJF) and its No Place Like Home campaign, which raises awareness of the plight of those forced from their homes and land due to natural disasters.