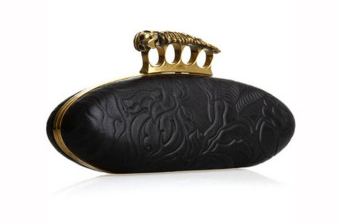 Who says biker gangs—um, I mean clubs—aren’t fashion-conscious? After all, those studded leather jackets and denim vests are always so au courant, but now the Hells Angels are proving that they’re more than a little fashion-savvy. As reported in the Financial Times, the iconic motorcycle club once known for terrorizing small towns near desert highways and causing general mayhem—are going after Alexander McQueen for allegedly misusing their trademark winged-death head symbol. And it seems as if they’ve done their research. The offending items include a knuckle duster, a chiffon scarf, a cocktail dress, and an embossed clutch.

I’m not sure what’s more shocking: the lawsuit or the fact that gangs have started getting look books, but I applaud them for keeping up with the current season. But of course, this is no joking matter. The riled up Hells Angels Motorcycle Group, as they’re now known, are taking their lawsuit quite seriously, also targeting stockists like Zappos and Saks Fifth Avenue for selling the merch in question. I’m not sure if this is a case of brand integrity for the Angels or just them wanting their share of the cut, but I’m not about to ask.