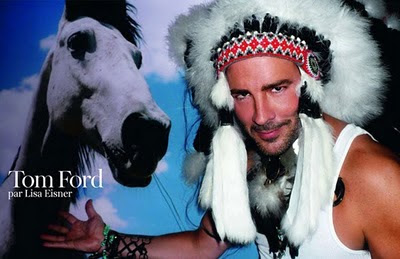 French Vogue has released images from its much-ballyhooed December/January issue, guest-edited by Tom Ford (or Mr. Ford as he now likes to be referred to). A man of many superpowers (including the ability to pull off wearing a feathery Native American headdress), the designer didn’t just show off his spring ’11 collection, which marks his much-anticipated return to womenswear. He also photographed, posed in and wrote much of the content. The issue, which hits newsstands November 30, might also be the first close-up view of Ford’s swanky Santa Fe ranch the public has been privy to.