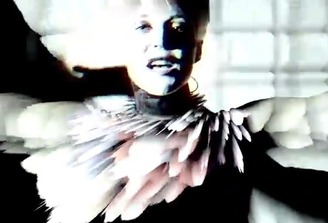 It sounds a little like Yoko Ono impersonating Nico doing vocal exercises in the shower (just picture that for a moment). But maybe that’s exactly the sound Daphne Guinness was going for in her new single, Fatal Flaw, the first from an album she’s been diligently tweeting about for months. Directed by Nick Knight (who obviously has the chops for an effects-heavy project, having created Lady Gaga’s Born This Way and Bjork’s Pagan Poetry) the video works overtime to portray a free-thinking artiste at her most electric, psychedelic, profund. You can’t hold down the soul of a POET.